Details of and discussion about club news & events (excluding races)

I have just been informed that Norman Adams, a longstanding member of the Beacon RCC, has died at the age of 92. His son Colin phoned this afternoon to say he had died after a short illness.
Norman was an outstanding hill-climber and short-distance time-trialist, He won the Welsh National 25-mile title in 1951 and was close to the British record at the distance on several occasions. He continued to compete in the Beacon Hill Climb in his 80s. Our thoughts are with his family 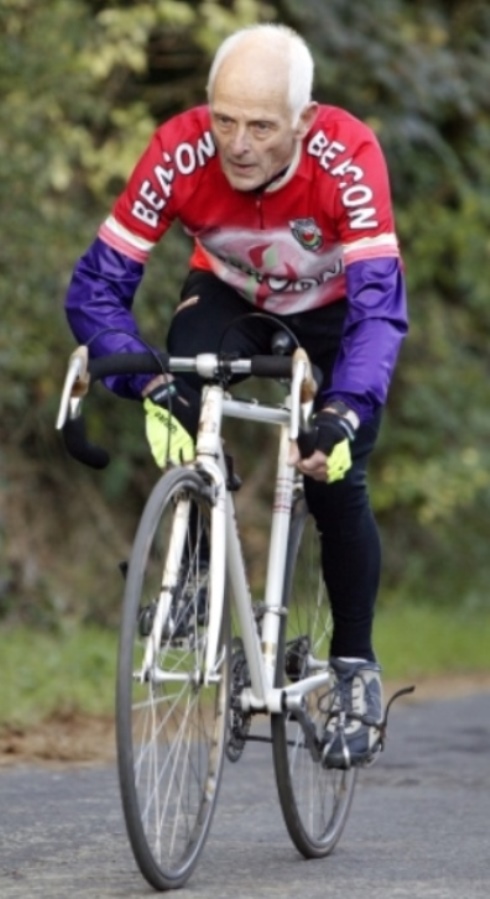 Such sad news about Norman. He was the club's leading short distance time trialist when I first joined the Beacon in 1952, but he was much more than just a racing man. He was a regular on club runs, often joining the club for lunch or tea when he had been racing in the morning, and a leading light on winter YHA weekends and I remember he organised and led a dozen of us on a two-week Hostel tour of Southern Ireland in 1954. He was full of encouragement for young riders like me, handing on much needed tips and advice, but always in a modest and self-effacing way. He was the complete clubman, typical of his time, and I rode many happy miles with him

I've been trying to post this picture on the Message Board in response to Oscar Hopkins' comment about the Christmas runs to Rhayder, upon which Norman Adams was a regular, but technology has defeated me.

This photo was taken on one of those runs, although I don;t know which year.

Not sure what became of Ginger, but of the remainder, only Oscar and me are here to tell the tale
It is better to be interesting rather than exact
Top

So sorry to hear about Norman, always had time for a chat, and never heard him say a bad word about anyone. Condolences to his family . RIP Norman
Top

One of the greats. I would very much like to attend his funeral. Did Colin mention anything, Dave? If not, could I have his contact details, please?
Top

Norman was responsible for me joining the Beacon. As a student in 1958 and after riding evening 10s on the Wythall- Gorcott course on the Alcester Rd. he several times invited me back to his caravan home for a mug of tea prepared by his then girl friend Wendy, and then to the clubroom and the rest is history. Thank you Norman.
Top

David Cole wrote: ↑
30 Jul 2019 15:40
Norman's son Colin is going to let me know about the funeral arrangements - which I will post on the message Board

Sad news re Norman an amazing record of lifetime achievement. A great character as well as a great cyclist. I remember marshalling the LMTT a few years ago when Norman took the wrong turn on the way back through Martley and did the first Hallow loop for a second time. We all yelled and waved but he didn't hear us of course and probably thought we were cheering him on. No chance of any of us catching him so he just powered round his bespoke extended course back to Great Witley.
Top

I can't recall how I learned of it but a few times I've followed Norman's wheel tracks to Ledbury, having a pint or two along at some stage (as I believe he did, but I'm not sure) then getting the train back. Once the train conductor recognised my jersey and, concerned that she had not seen Norman for a while, asked about his well being.
Eat cake before you're hungry
Top

One of my many memories of Norman was cycling to the Castle Hotel at Rhayder at Christmas which we went to many times, and then over the mountains in all sorts of weather.
Top

Norman's funeral will take place at at Redditch Crematorium on 19 August at 2.45pm.

Strong representation from the Beacon will be a fitting tribute.

There will be drinks afterwards at a venue which will be announced in due course.
Top

Ray (ginger)Stevens moved to Canada and as far as I know is still there.
Top

Also sorry to hear of Normans passing. I remember no one could win the club vets BAR while he was still riding.
I carn't remember how many times he won it in the early 2000's but must have been 5 or 6 in a row.
Top

Norman's funeral will take place at at Redditch Crematorium on 19 August at 2.45pm.