Message Board for Members and Friends of Beacon Roads Cycling Club
http://www.beaconrcc.org.uk/message_board/

I was recently given an interesting bike that I'm now in the process of restoring to racing glory - a '95 SR Litage built by the old Suntour factory in Japan. Its a bonded alu frame and forks, all naked metal (Shining up a treat!) with some nice touches like hidden cable routing and some beautiful '90's Shimano 105 parts (the headset is really nice - original cartridge bearings in it).

It came with some pursuit bars and some heavy gearing (54 on front with 170 cranks and a 11:18 7 speed cassette....beefy) and seeing as the tubing is so smooth I thought I'd turn it into a TT-ish bike with period parts.

Would anyone like to chime in with what they would consider early 90's parts for such a build? A few tricky things to find out from photos like what seatposts were riders using back then? The wheels are ok but are using steel rims - Alu rims must have been kicking around then right? And would I be too far off the post looking for something like a Mavic Comete +- disk for the back? Scott bars (with the nice loop and kick-up) for the cockpit?

Any ideas or reminicing about '90s racing welcome!

by petemarshall
Pretty sure alu rims had taken over from steel on mid to high end bikes by the 90's. Certainly the one bike I have had from virtually new since 1987 (built in 1986) came with alu rimmed wheels and it's a touring bike so time trial bikes certainly would.

I've a pair of Cinelli Spinaci for 26.0mm bars that I'll sell, they must be c1995. As Pete said rims would definitely be alu; I started racing in '87 and all my bikes had alu rims from then. You probably want to look for a Turbo, Rolls or Flite saddle, they were basically what everyone rode. As luck would have it I've a Ti Flite in the box with the Spinaci - and an Avocet computer! And a pair of 1st gen Dura Ace 36H large flange hubs laced onto Mavic MA2 rims that are from the late 80s.

Let me know if you'd like to look at any of the parts.

by Lapin
Nice! Thanks Carl. The Spinaci's look interesting! My bars are 26mm around the clamp area but drop off to 24mm otherwise - they may well fit. Are you in Stirchley? How much would you want for them? by Lapin
So here's the SR Litage as it stands, shined up nicely (albiet after 6 hours with the dremel and some polishing paste). Still a ways to go to get a mirror finish on some of the lugs but I might leave it as it is for now. Managed to get hold of some Shimano 1055 Downtube shufters and chainset. Found some MA2 rims laced to 1055 hubs too so they're in. Also got hold of some old Profile Design aero bars (I prefer the 'loop' look) should look bangin'. I'm interested in the Flite saddle Carl - would it be ok to have a look at it some time?

by Lapin
Well I finished it! Got hold of some Zipp 340's with Hope Ti glide hubs for a song and found an old Turbo saddle to sit on. Dead chuffed and it rides great (although the gearing could do with being lowered a bit...tad 'superhuman' at present...) 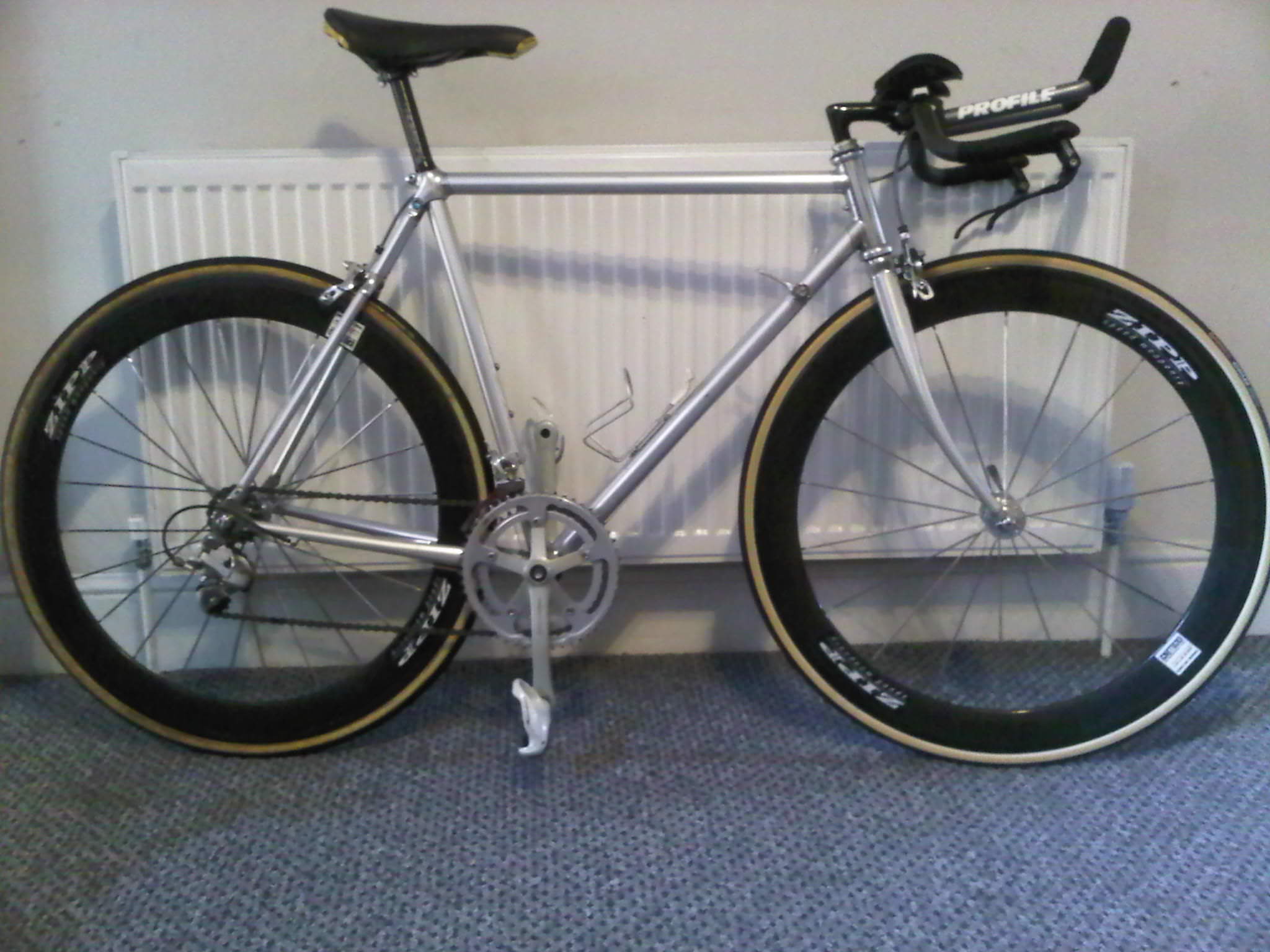 by petemarshall
Be interesting to ride it against a contemporary bike on a few of the club courses to see what recent developments have gained.

petemarshall wrote: ↑
15 Nov 2017 17:48
Be interesting to ride it against a contemporary bike on a few of the club courses to see what recent developments have gained.

Indeed! I've been training on it as much as I can (of what little is actually being done this time of year) and its definitely harder to put down any reasonable power compared to my road frames. Going to take some work to get new muscle groups up to snuff to make a fair comparison.

Sorry I've only just realised you replied to my comments re: parts. They're all still available so PM me if you'd like to have a look at any of them.

by George
Dave, I didn't post earlier because I couldn't offer you any practical help. But I thought you might be interested in a TT restoration that I did about three years ago. An older bike, but still. Full account and pictures here: http://www.ngc.haywoodhouse.net/Pages/Restoration.html

To pick up on Pete Marshall's point: I rode my restored TT bike and my modern-ish TT bike on the club's 5-mile course on successive Wednesdays under similar conditions. The modern bike was about half a minute faster. However, I think that that was partly due to me being unused to riding the old bike. My guess is that the true difference was maybe 20 seconds over 5 miles, or a couple of minutes in a 25. Probably the straighter and flatter the course, the bigger the difference would be. You might notice a smaller difference, because you've got aero-bars and deep-section wheel, whereas my bike pre-dates those innovations.

by Dave Cox
Great read George and all the time I thought you were working on an old MBK aka Motobecane. My daughter had one for a while OK but not remarkable !!
All times are UTC+01:00
Page 1 of 1