Discussion about any other rides & touring

The story of a 5,500 mile tricycle ride from south London to the far south of Egypt and back (posted by George on behalf of former Beacon member Howard Boyd).

Springtime 1963 is just over 50 years ago. I was about to leave the Upper Sixth form at grammar school, ready to study Archaeology at university in October. The whole world of the classical civilisations of Greece, Rome and Egypt was within reach; just the challenge for a teenager mad about cycling. This is the story of an unforgettable journey to the Mediterranean by three cyclists and also the story of one teenager’s discovery of different cultures and how to deal with disappointments and personal crises.

Looking back on the hectic two-month period for getting visas (Egypt, Yugoslavia), student card and the required jabs (Malaria and the ominously named Yellow Fever), all the while planning a “must see” route to visit the most well-known sites and working long hours as a petrol pump attendant to raise some money, I ask myself did I really do all that on my own? The answer is: not quite. Two old friends – Alan from the YHA Local Group and Bruce from a local cycle racing club – heard of my plan and threw in their jobs to join me. Bruce shared my unusual choice of mount: a racing tricycle with good carrying capacity. Alan had a more conventional touring bicycle. We shared out the tent, cycle spares and cooking equipment.

We left England in May 1963, accompanied for a day by Bill Hens from our cycle shop. Our main priority was to visit the amazing rock-cut temples of Abu Simbel before they were drowned for ever in the rising waters of Lake Nasser. Between London and Abu Simbel we had little knowledge of the land or the conditions for cycling. Every day was an adventure.

The first geographical feature to conquer was the Channel. We opted for the British United air ferry, wheeling our cycles through the space between two cars on their way from Lydd to Le Touquet, and admiring the view of the Channel through the gaps in the floor. It was my first flight.

We camped daily, usually making a hearty meal of pasta or risotto, washed down with a litre of wine. Breakfast was sweeter and fruitier, with milk, bread and jam, sometimes eggs. Shopping for bread and cheese lunch was one of the opportunities for meeting people. I don’t think we saw any other touring cyclists.

We soon got into a rhythm: rising at 6 a.m. breakfasting and striking tent, riding with occasional breaks to 1 p.m. then lunch and more riding and looking for a suitable camping spot for supper and sleep.

The days passed. We managed to find time to look around us as we cycled on: Reims, the moving WW1 Armistice site at Compiegne, Basel, Zurich, the St Gotthard tunnel, Como, Venice, Trieste, all passed under our wheels. In good spirits and feeling fit we crossed into Tito’s Yugoslavia. When we sipped Turkish coffee and nibbled baklava pastries in the shadow of the marvellous bridge at Mostar, we felt we had left Western Europe behind.

In Yugoslavia, brushes with the police or army were numerous. Clearly we were not supposed to be cycling or, worse, wild camping in a Communist state. More troublesome to us were the sections of the Belgrade to Saloniki motorway where we were firmly told cycling was banned. The alternative network of stony cart tracks was muddy and rideable only with difficulty.

Even worse followed: a bridge swept away and replaced by a home-made suspension bridge, the wires of which were not even wide enough apart for the tricycles.

I still have terrors about this bridge. Even to have seriously considered using it shows my immaturity. I might easily have fallen off on the slippery planks, to be away swept away by the river torrent. By complete chance there was a small railway station right behind, which took us and our three cycles on to Skopje, capital of Macedonia. Four weeks after we rode through Skopje, an even worse danger occurred: an earthquake with heavy loss of life and the destruction of the historic city.
After 5 weeks we reached Athens. The Parthenon and the other buildings of the Acropolis were just as wonderful as their photographs. We treated ourselves to a couple of nights of Youth Hostel accommodation and café meals, before heading off to Piraieus, the port of Athens. We took the wheels off the trikes before boarding – and one wheel rolled over the side but miraculously didn’t fall into the water; it had dropped onto a ledge. Another disaster averted.

After the 40-hour ferry voyage to Alexandria we set off at 3 p.m. on the 140 mile road to Cairo, slept by the road, and arrived just after noon the next day. I think there must have been a tailwind, and the road, through the Nile delta, was quite flat, but we were still rightly pleased over our record ride. It was a good sign for the trio’s morale as we faced the uncertainties of our journey to the south of Egypt.

Or so we thought. Bruce delivered us a bombshell; he had tired of the journey and wanted to stay behind, maybe even go home. In our base at the Youth Hostel we discussed what could be done and decided to split up amicably, dividing the equipment accordingly. Bruce found a modest role as a Youth Hostel volunteer helper, at least until we returned from the south.

Alan and I now set off up the Nile Valley, on what turned out to be the adventure of our lives, despite painful disappointment. The water level of the Nile at Abu Simbel was too low for us to land. 30 minutes before the steamer left for the Sudan our passports previously stamped “Seen on departure for Abu Sombol” were marked “cancelled”. There seemed to be no practical alternative, short of hiring vehicles for an expedition.
It was ironic that, while were away, UNESCO announced that funding had been secured to dismantle the colossal Abu Simbel statues and re-erect them at the top of their cliff. (Years later, Alan travelled in comfort to see them.)

As we headed north, back towards Cairo we found ourselves the recipients of outstanding hospitality. Again and again, as we passed through a village we would be invited to join men enjoying a roadside glass of tea. This would lead to our cycles being brought indoors or even upstairs, and an assumption that we would be given bed and breakfast. English speakers, such as students and telegraph operators, would come and translate for us. These were the most heart-warming experiences of our whole journey.

The final leg of our journey started with our return to Cairo, where we spent many days in the Egyptian Museum and one visit to Gaza’s Pyramids and Sphinx. The Tutankhamen treasures in the museum are world famous, but there are many other exhibits of fine statues and papyrus to be seen, not to mention the huge open-air temple complexes in Luxor and Karnak that we saw in the south. 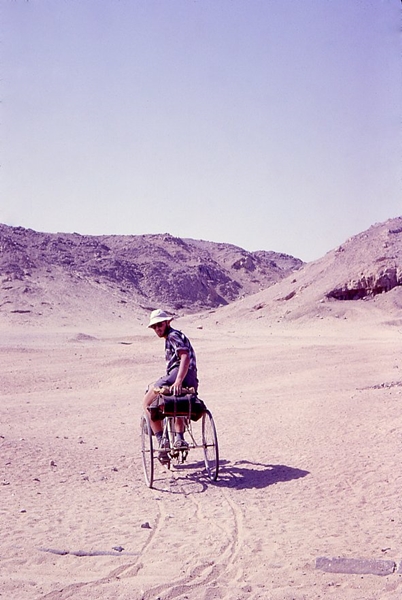 When we had studied the last hieroglyphics it was time to meet up with Bruce for the last time and return, this time by a different route. Landing in Athens we pressed on over the bridge which spans the Corinth Canal and followed a route around the Peloponnesus, to Mycenae, Olympia and Corfu. Italy was our next destination, starting at sea level with Brindisi and finishing at the summit of the Great St Bernard Pass (2469 m), passing through Pompeii, Naples, Rome, Florence and Pisa on the way. In late August we rode through northern France and celebrated our last night camping on the roadside by cremating most of my threadbare clothing.

On the last day of our journey we joined Bill Hens and other cycling friends, watching a bicycle race in Forest Row in the rain. At first they were suspicious of two bearded and bedraggled strangers, but they soon recognised our voices. There was much to tell.

Alan and I think of our adventure every year. Realistically, it could not be repeated. Yugoslavia destroyed itself in the 1990s in a terrifying civil war and the wounds are still raw. Egypt and other Arab countries may be heading in the same direction. The Mostar bridge is no longer the symbol of communities living together in the Balkans in harmony. International passenger shipping no longer sails, as an alternative to air travel. The road network has been vastly upgraded to satisfy the needs of motor transport. And rail companies do not carry tricycles any more.

Thanks George for posting this and of course Howard for writing it. Amazing trip and quite nostalgic.
Top

Fantastic. What an adventure
Belt up, we're going for a ride
Top

Wonderful! A tale from a different age, not a Garmin or a credit card in sight.
Top

Quite an undertaking for anyone let alone a teenager. Great stuff.
Top
Post Reply
6 posts • Page 1 of 1

Return to “Other Rides & Touring”